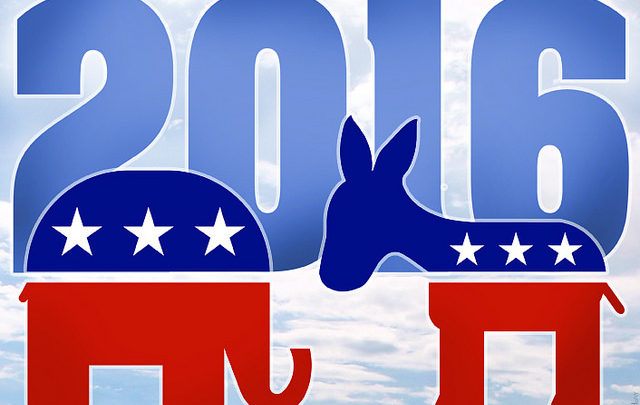 There are plenty of reasons you might choose one presidential candidate over another on November 8th: his or her stance on taxes, government spending, national security and immigration, to name just a few key issues. But here’s one thing don’t need to factor into your decision—which candidate will be better for your investment portfolio over the long run.

If you keep up with election coverage, you can easily get the impression that the person voters decide to put in the Oval Office can determine whether your investments will prosper or perish. For example, based on Standard & Poor’s 500 futures trading during the first presidential debate, University of Michigan economist Justin Wolfers estimated that stocks could lose 10% to 12% of their value if Donald Trump wins the election.

I don’t doubt his calculations. But even if he’s right, we’re talking about a short-term movement. The market has fallen plenty of times in the past by that much and more, and has subsequently rebounded and moved on to higher ground. So if you’re investing for goals like saving for college, building a retirement nest egg or making your savings last throughout retirement, you should be more concerned with how your investments perform over the long-term.

And on that score, a recent Vanguard analysis found that stock returns are virtually the same over long periods regardless of who controls the White House. Specifically, when Vanguard senior investment strategist and former Johns Hopkins political science professor Jonathan Lemco examined stock returns from the Franklin Pierce administration through seven years of the Obama presidency (1853 through  2015), he found that the gains over this 163-year period were essentially equal—about 11% on average—regardless of which party controlled the White House. In short, through 70 years of Democrat administrations and 93 years of Republican rule, the markets generated pretty much identical average returns. Or, as the headine in Lemco’s blog post put it: “Markets are nonpartisan long term.”

Still, many people apparently remain convinced that the election should play a role in their investing strategy. Indeed, 63% of the 1,633 Americans surveyed for a recent Blackrock Investor Pulse survey said they’ve factored the election into their investment decisions over the past year. Which is understandable. After all, the financial press is chock-a-block with stories that suggest you should tilt your holdings toward certain industries or specific companies depending on which candidate wins. And clearly the candidates run on the premise that their policies on such issues as fiscal spending, taxation of individuals and corporations and how businesses will be regulated will improve the performance of the economy overall and, by extension, that of the financial markets.

Have You Crash-Tested Your Retirement Plan? Better Do It Now

But while presidents certainly hold some sway over economic and financial affairs, they don’t have anything approaching total control. For example, both houses of Congress also have considerable clout in shaping policy and in determining whether a given administration’s proposals eventually become law. Besides, even if the president gets players inside the beltway to enact specific policies, that still doesn’t mean those policies will have their intended effect. “I don’t want to diminish the importance of presidential elections,” says Lemco. “But the president’s actions are only one of many important inputs into the system.” In the short term, Lemco notes, a president’s policies may very well have an impact. But in the long term, they tend to be overtaken by other forces such as demographic trends, technological change and globalization.

I don’t want to suggest that you should ignore candidates’ pronouncements on economic and financial issues. Obviously, their positions on such matters are something you’ll want to consider in casting your ballot. But you shouldn’t assume that your portfolio’s long-term health is riding on who wins the election. Even more important, you shouldn’t rejigger your investments based on who ends up being the next occupant of the Oval Office.

This Tool Can Help You Avoid A Devastating Retirement Mistake

Instead, you should focus on the things that matter most even when we’re not consumed by the circus of a presidential election cycle. Start by setting an asset allocation policy that makes sense given how long you plan to have your money invested and how much risk you’re willing to take. You can do that by completing a risk tolerance-asset allocation questionnaire like this 11-question version Vanguard offers online.

Next, make sure you’re diversifying broadly. That means owning stocks that represent all industries and sectors of the economy as well as government and investment-grade corporate bonds, preferably with maturities in the short- to intermediate-term range to avoid the potential damage when interest rates eventually start to rise from their historically low levels. Then keep expenses low, so you give up less of your portfolio’s returns to investment management fees.

You can get a sense of how diversified your stock and bond funds are by plugging their name or ticker symbol into the Quote box at the top of any page at Morningstar.com and then clicking on the Portfolio tab. Go to the Expense tab, and you can see how your funds’ annual costs stack up versus their category average. Of course, the easiest way to get broad diversification while keeping fees low is to stick as much as possible to low-cost index funds.

So I suggest you ignore the hype and the hoopla that surrounds the intersection of politics and investment advice and keep your portfolio apolitical, so to speak. They way, you’ll increase your chances of achieving your long-term financial goals regardless of who ends up taking the oath of office in January.  (10/26/16)