Why Should I Buy An Annuity If I Can Do Better Investing My Savings On My Own? 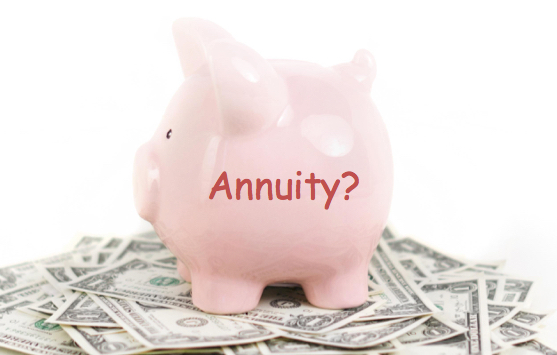 Why should I buy an annuity for monthly income if I can get the same amount of income or more by investing my money on my own, and still maintain access to my principal?

Is it possible for you to invest your savings in a way that would allow you to generate the same or even more retirement income than buying an annuity? Sure. But it’s not a given that such an approach would work, and you should be aware that it also has some potential risks.

Here’s an example. Let’s say you’re 65 in good health and have $100,000 in savings from which you want to draw reliable income after retiring. You could buy an immediate annuity with that hundred grand and today you would receive about $545 a month guaranteed for life.

Or you could invest your money in a combination of stock and bond mutual funds or ETFs and make withdrawals for as long as your saving last, which would depend on the rate of return you earn and how much you withdraw each month. If we assume you earn, say, a steady 5% annual return on your mix of stocks and bonds, you could draw $645 a month, or $100 a more a month than the annuity pays, and your stash would until about age 85.

So, as the scenario above shows, it’s clearly possible to generate more monthly income by investing on your own. But there’s also the chance that you might deplete your nest egg too soon. Age 85 may seem like a far way off when you’re 65. But if you go to the Longevity Illustrator tool, you’ll see that a 65-year-old man who doesn’t smoke and is in decent health has a better than 50-50 chance of living beyond that age. Which means if you earn 5% a year and withdraw $645 a month, there’s a better than 50% chance you could outlive your money.

Drawing a bit less, say, $595 a month, which is still $50 more than the annuity’s payment, would allow your savings to last longer, roughly to age 88. But there’s still a better than a one-in-three chance that a healthy 65-year-0ld will live longer than that. In fact, even if you limited yourself to exactly the same amount as the annuity, $545 a month, your stash would run out just before age 93, an age a 65-year-old man in average health has roughly a 20% chance of living beyond.

Of course, you might be able to draw more income for a longer period of time if you earn a higher rate of return. But that would involve taking more risk. You would have to invest more heavily in stocks, which would make your savings more vulnerable to market downturns, which in turn could shorten the longevity of your nest egg. And even if you’re willing to accept that higher risk, there’s no assurance you’ll achieve the higher return you seek. Indeed, given the relatively modest returns for stocks and bonds that some major investment firms are projecting for the next 10 years, even a 5% annual return on a portfolio of stocks and bonds may hardly be a cinch to achieve.

The point is that when you’re investing in assets like stocks and bonds, there’s no guarantee that you’ll be able to maintain a particular target rate of monthly income as long as you live. You could do very well and earn a high rate of return that might allow you to draw much more from your savings than you could with an annuity. Or your investments could fare poorly and you might run through your savings more quickly than you’d hoped.

An immediate annuity, by contrast, guarantees a predictable monthly income for as long as you live. (To see how much income you might get based on your age and amount you have to invest, check out this annuity calculator.) But that guarantee isn’t a free lunch. You give up the potential upside you have if stocks do well. In return for the guarantee of lifetime income you also typically give up access to your principal, which means you would no longer be able to dip into the money you invest in an immediate annuity for emergencies and such. And if you end up dying relatively early in retirement, you could receive less in payments than you paid for the annuity.

But the point of an annuity isn’t to generate the highest possible return on your money or to provide constant access to your principal or to ensure you’ll get back every cent you paid in. Rather, it’s to generate income you know you can count on no matter how long you live.

4 Things You Need To Know About The 4% Rule

Many people get hung up on the idea that they might get hit by the proverbial bus and die soon after buying the annuity. But even if you do die early, whether due to a rogue bus or some other reason, that doesn’t mean that buying an annuity was a lousy idea any more than buying home insurance was a bad move because your house never burned down or was never flattened in a hurricane. Ultimately, an annuity is insurance against the possibility of living so long that you run through your savings.

That said, not everyone needs an annuity. You’ll already receive guaranteed lifetime income in retirement from Social Security. If Social Security’s payments are enough to cover all or most of your essential living expenses, you may not need to devote any of your savings to buying more guaranteed income. (If you’re not already collecting Social Security, you can get an estimate of the benefit you’ll receive by going to Social Security’s Retirement Estimator tool.)

Similarly, if your nest egg is so large that the amount you have to withdraw to cover your expenses is small enough that your chances of depleting your savings while you’re still alive are minimal, then you can probably get by fine without an annuity. (This retirement income calculator  can help you estimate how long your savings might last at different withdrawal rates.) There would also be little point in committing funds to an annuity if your health is so bad that it’s unlikely you’d live even to the life expectancy of someone your age (although, if you’re married or have a significant other, you would also want to take that person’s longevity into account).

Even if you decide you are a potential candidate for an annuity, you wouldn’t want to put all, or probably even most, of your savings into one. Ideally, you would consider “annuitizing” only a portion of your money and keeping the rest in a diversified portfolio of stocks and bonds and cash that could provide liquidity for emergencies and unanticipated expenses, while also giving you a shot at higher investment returns that could help maintain the purchasing power of your nest egg in the face of inflation throughout retirement.

Finally, even if you decide that this approach of combining an annuity with conventional investments makes sense, you would still want to consider such prudent steps as shopping around to make sure you’re getting a competitive payment, annuitizing gradually rather than all at once, diversifying your annuity money among a few highly rated insurers and limiting the amount you invest with any single insurer to the maximum amount covered by your state’s life and health insurance guaranty association.

Bottom line: There are plenty of good reasons to say no to an annuity. But rejecting the idea of putting a portion of your savings into one solely because you feel you can “beat” an annuity investing on your own isn’t one of them. (3/17/18)