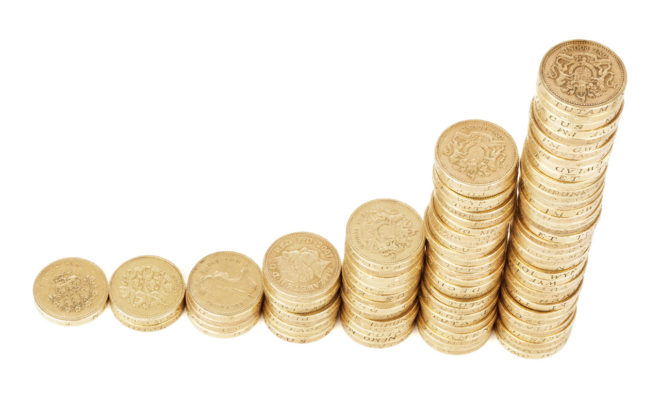 A recent Vanguard blog post on the benefits of compounding calculated that forgoing a $3.50 cup of java every day and investing that money in a diversified portfolio earning 6% a year, you would end up with more than $100,000 after 30 years. But while this example nicely illustrates how the compounding of investment gains can turn even small sums into big bucks over time, here are three more practical and effective ways to harness the power of compounding to build a bigger retirement nest egg.

1. Put your savings on autopilot. The problem with examples showing how saving a dollar here, a buck there and investing it can translate into a big pile of dough down the road is that they’re not very realistic. Even if you manage to forgo some small indulgence like a daily latte are you really going to invest that money? I doubt it. Besides, any savings regimen that depends on you making thousands of conscious decisions to save over the course of many years and then following through to invest the savings just isn’t likely to pan out.

A better approach: Make your savings automatic by arranging to have a percentage of pay go directly from your paycheck into a 401(k) or similar retirement account. Not only will this increase the odds that the money you want to save will actually get saved; tying the amount you save to your salary is also a more effective way to ensure you have a steadily rising stream of dollars going into savings rather than constantly looking for new ways to cut back and save.

Such regular additions to savings—and the compounded returns they earn—can add up over the course of a career. Take the case of a hypothetical 25-year-old who earns $40,000 a year, receives annual raises of 2%, contributes 10% of pay to a 401(k) or other company retirement plan and earns a 6% annual return on his savings. By age 65, the combination of saving 10% of a salary that increases over time plus the compounding effect of earning 6% year after year would leave that person with a nest egg of just under $830,000. Roughly $242,000 of that amount would come from his own contributions over the years. But the biggest portion by far, some $588,000, is the result of the investment returns those contributions rack up over the years.

2. Get as early a start as you can. Compounding is most effective over long periods of time. Which is why failing to save in the early years of your career can leave you with a much smaller nest egg than if you had gotten a leg up on your savings effort. For example, if the hypothetical 25-year-0ld above waits just five years until age 30 to begin saving, he would end up with $185,000 less at retirement—$645,000 vs. $830,000. And if he holds off an additional five years—waiting until he’s 35—his age-65 nest egg would total a bit less than $500,000, or more than $300,000 less than what he’d have by starting at 25.

Can You Pass The Retirement Quiz That Most Seniors Flunked?

Of course, you can try to make up for a late start by saving more later in your career. But the longer you wait, the more you’ll have to ratchet up your savings rate, and the harder you’ll find it to recoup lost ground. For example, for the 25-year-old in the scenario above to end up with the same size nest egg at 65 starting at age 35 instead of 25, he would have to save about 17% a year the rest of his career.

3. Dial up your savings rate. The final way to make compounding work more in your favor is to save more. The more money you put away, the bigger the investment gains it will generate and, in turn, the bigger the gains on your gains, leading ultimately to a larger nest egg.

10 Smart Ways To Turbocharge Your Savings

Another advantage to nudging up your savings rate is that it can give you a bit of a cushion in case your well-laid retirement plans don’t work exactly as envisioned. For example, if investment returns come in lower than expected or you’re forced into retirement sooner than you’d like, the extra money you stashed away earlier in your career (and the investment earnings on that dough) can give you a little more flexibility and wiggle room, perhaps allowing you to limit yourself to relatively minor adjustments to your post-career lifestyle rather than having to dramatically scale back your retirement plans.

Bottom line: Compounding can effectively act as a partner in your retirement savings effort, taking some of the burden of building an adequate nest egg off you. But you’ve got to take the lead. And the sooner you start saving and the more you put away, the more compounding will work for you and the more you’ll get out of that partnership. (7/5/17)