The Best (And Worst) TV Commercials About Retirement 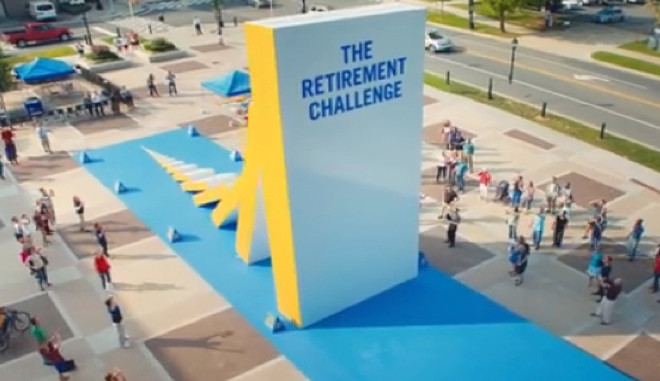 Americans watch about an hour of TV ads every day. So it would be nice if you could pick up some useful tips from commercials about retirement planning. And in a few cases, you can. Here are my ratings of the current crop of retirement TV ads, plus lessons from the best of the lot.

This series of ads starring Harvard psychologist Dan Gilbert is the crème de la crème of retirement-themed ads. They’re entertaining, they explore sophisticated themes and you can learn something about how to prepare for retirement by watching them. The most recent is “Past-Future,” an ingenious little experiment that asks people to stick yellow or blue magnetic words that describe pasts and possible future events on a wall using yellow words for good experiences and blue for bad. The point is to show that people have a sunnier view of the future (more yellow words) than the past, which speaks to the need to be realistic in retirement planning. My favorite, though, is “Dominoes,” which uses progressively larger dominoes to show how small sums invested weekly or monthly can compound to big bucks over time. Check out these ads and other experiments that can help you hone your retirement planning skills at The Challenge Lab.

Check Out: Answer These 10 Questions To See If You’re On Track Toward Retirement

In this humorous little spot, a worker tells her supervisor she’s handing in her “15-year notice” because she plans to retire in 15 years and knows that future date “will really sneak up on you.”  Survey after survey shows that pre-retirees wish they’d started planning for their retirement sooner. This commercial provides a clever and compelling reminder to get started now.

Speaking with a pained expression on his face as if he’s being forced to do this commercial against his will, actor Tommy Lee Jones glares into the camera and says, “Ameriprise asked people a simple question: Can you keep your lifestyle in retirement?” Several people then admit they don’t know whether they can and  Tommy refers to Ameriprise’s exclusive “confident retirement approach,” although just what the hell that is, he gives no clue. No matter. The power of this commercial is that it makes people ponder that fundamental question: Can you keep your lifestyle in retirement?

As a couple organizes its finances to plan for retirement, an orange dollar bill transforms itself origami-style into a little orange squirrel that proceeds to stash acorns around the couple’s house. The message is sound: Start today so you’ll have that “orange” savings money set aside for tomorrow. But I have to admit I’d be more than a little creeped out by the idea of a radioactive-looking rodent hopping around my house

In this little vignette, retiree Alex muses that after a lifetime of work he’s finally able to focus on what matters most—being a “co-pilot” to his grandchildren—because “Transamerica helped provide a lifetime of retirement income.” Not much in the way of useful info here, although the spot does deserves credit for at least bringing up the idea that you’ll need lifetime income once the paychecks stop.

As a jaunty version of Billie Joel’s “My Life” plays in the background, we meet Larry: a retirement-planning nerd who quit his friend’s leaf-raking business because it didn’t offer a 401(k) and who now plans for retirement by transferring money from his Bank of America savings account to his Merrill Edge retirement account. Wow, you can actually transfer money online from a savings account to an investment account? Who knew? Somehow I expected more from an outfit that offers the innovative Face Retirement age-morphing program online.

I just didn’t get this one. Brilliant scientist Harriet Tuttle clones four versions of herself to lead a more efficient life, which means she needs an adviser to create five customized retirement plans, one for each Harriet? Boy, the fees on that gotta add up. I get that none of us is a monolith; we have a variety of interests we’ve got to factor into our planning. I’m even willing to go with the premise of multiple people. (I attended Catholic grade school so I’m well versed in the Holy Trinity idea of three separate gods in one god.) But I just couldn’t wrap my mind around this metaphysical mishmash.

Check Out: 3 Ways To Rescue Your Retirement If You’re Behind

This is more like an old-fashioned sales pitch than a slick TV commercial, but it does touch on an issue that doesn’t get much attention—namely, Medicare typically doesn’t cover most dental care. If nothing else, this ad puts you on notice that if you haven’t factored in the cost of caring for your choppers, your retirement budget may have a major gap (or should I say cavity?).

In his easy-going avuncular style, former U.S. senator and actor Fred Thompson assures us that reverse mortgages are not “too good to be true,” nor is there any catch. True as far it goes, I suppose, but they’re not as simple and straightforward as Fred makes them seem. I put it in the “big on sales pitch, short on information” category. For kicks, you might also want to take a look at the “reversed” version” of this commercial for reverse mortgages.

10. Pacific Life—Whales  Rating: 1 Harpoon  The voice-over starts off promisingly enough noting that retirement planning requires “a plan for what you want your future to look like.” But it goes nowhere from there, other than suggesting you talk to a financial adviser and then cutting to a shot of a big ol’ humpback whale breaching (which, according to Pacific Life, is supposed to represent strength, focus and guidance.”) I suppose it could all make sense if you think of yourself as Captain Ahab and the whale as the retirement you’re pursuing. But for me at least, the commercial doesn’t make much of a splash.  (5/2/15)