Should I Move My Retirement Savings Out Of The Market? 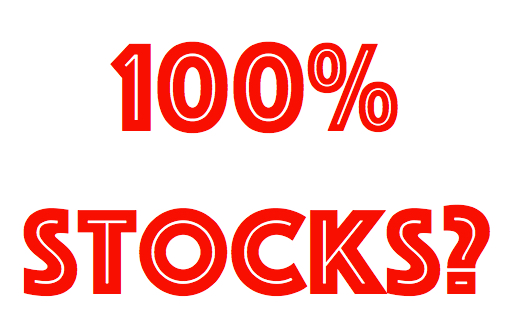 I’m well into retirement age, although still working, and have my nest egg of about $500,000 invested entirely stocks. But I’m getting worried about the future of the economy and the market. Should I transfer everything to a safer investment?

I think you’re absolutely right to question whether keeping 100% of your retirement stash is the right way to go at your age, or for any age at that matter. Yes, the market has given us a terrific ride, with stock prices more than quadrupling since they bottomed out in the wake of the financial crisis.

But even though we don’t know when this bull run will end, we know it will at some point. And if history is any guide, its demise will likely come via a major setback, with a near 60% drop in stock prices like the one from late 2007 to early 2009 not outside the realm of possibility.

But even knowing that, I don’t think the answer is making a move as radical as shifting your entire nest egg into a safe haven. One reason is that, for all you know, making such a move now could be way premature. Over the past several years, Cassandras have predicted the imminent collapse of this bull market for a variety of reasons—the downgrading of U.S. Treasury securities in 2011, Brexit in 2016, the election of Donald Trump in 2017—and yet it’s still going strong. If you abandon stocks every time you get jittery about the economy or the financial markets, you may lose out on some impressive growth in the value of your savings.

Another reason I’m not a big fan of investors fleeing to “safer investments” is that the investments they chose sometimes aren’t as safe as they think they are. I find that when people are skittish they often gravitate toward gold, which can be just as volatile as stocks, or they’re vulnerable to pitches for expensive annuities or investments that purport to offer high yields and safety but come with other risks.

Besides, even if you do manage to get the timing right when exiting the market, you’ve then got to decide when to get back in. That’s hard to do in real time as opposed to with the benefit of 20/20 hindsight. Get that decision wrong and you might miss out on the often explosive gains stocks’ generate in the early stages of coming of a recovery. For example, stock prices skyrocketed 39% in just the first three months after hitting bottom in the wake of the financial crisis.

So rather than trying to figure out when to get in and out of the market and which investments really offer the safety you seek, I recommend you set an investing strategy you can live with in all sorts of market conditions. And by that I mean creating a mix of stocks, bonds and cash that can generate reasonable returns, given the amount of risk you’re willing to take, and how long your money is likely to remain invested.

Generally, the younger you are, the more of your savings you’ll want to invest in a diversified portfolio of stocks. The rationale for that is simple: Although stocks can be very volatile, over long periods they tend to deliver higher returns than both bonds and cash. So if you want to build a nest egg large enough to sustain you through a long retirement, stocks offer the best shot. On the other hand, nothing is certain. So it’s a good idea even for young investors to hedge their bets by having a small portion of their savings in bonds (and, of course, to keep a cash reserve for emergencies and such).

As you near and enter retirement, you’ll likely want to focus more on avoiding big drops in the value of your nest egg, which means tilting your asset allocation away from stocks and toward bonds and cash. You’ll still need some growth potential in your retirement portfolio, however, if for no other reason than to help you maintain your purchasing power over a post-career life that, as this longevity calculator shows, could last into your ’90s.

There’s no asset allocation that’s right for everyone of a given age or in particular situation. You can get a sense, though, of how to divvy up your assets by going to this risk tolerance-asset allocation tool. You answer 11 questions designed to gauge, among other things, how you might react to a big market downturn, and the tool not only suggests a portfolio mix, but shows how that blend of assets as well as others has performed in the past. You might also find it helpful to see how the target-date retirement funds offered investment firms like Fidelity, T. Rowe Price and Vanguard divvy up their assets for investors of different ages.

Once you settle on an allocation that’s suitable for you, stick with it, except perhaps to rebalance occasionally to restore your portfolio to its target mix (although every few years you might also want to revisit the tool I mentioned above to see if your risk tolerance has changed as you age).

But what you don’t want to do—and this applies whatever your age—is to get into that Wall Street “risk on-risk off” mentality of jumping from stocks to bonds or cash based on where the market appears to be headed in the short term. When it comes to investing the money you’ll be counting on in retirement, you want to develop a rational, disciplined strategy that balances risk and reward, not engage in a never-ending guessing game you can’t consistently win. (1/29/18)