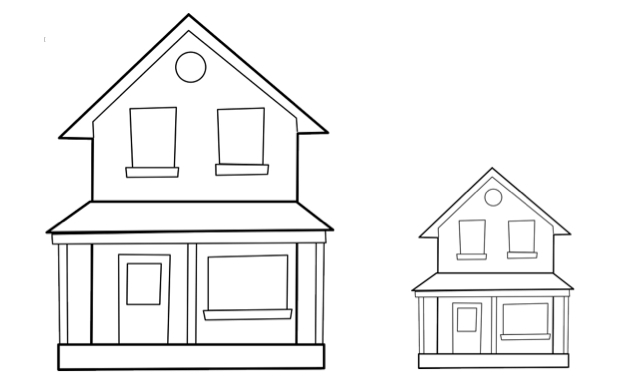 Trading down to a smaller home can lower your housing cost and maybe get you some extra cash to bolster your retirement nest egg. But downsizing can also get complicated. I went through the process recently; here’s what you can learn from what I did right, and wrong.

Downsizing isn’t for everyone, but for many people it’s a crucial element of retirement lifestyle planning. Even though we’re not retired, my wife and I began to grow weary of maintaining our three-story six-bedroom house in Westchester county just north of New York City.

Check Out: Why You Should Think Twice Before Doing a Roth IRA or 401(k)

Granted, my wife and an assortment of other people took care of most of the upkeep. I mostly managed and criticized. But after digging out from a series of blizzards last winter, I decided I never wanted to wield a shovel again. So as part of our “home stretch” retirement planning, my better half and I embarked on a downsizing journey that ended with us selling our house and moving (all of a mile) into a condominium in downtown New Rochelle.

Based on my experience, here are three tips you should keep in mind if you’re thinking of trading in the old homestead for new digs.

1. Give yourself plenty of time. When we began our search, I thought we’d spend a few weekends with a real estate agent looking at condos, devote another week or two to mulling the pros and cons of the many suitable places our search turned up and then settle on our dream home. Six months and more than two dozen showings later, we still hadn’t found a single place where we felt we’d want to live in retirement.

The rooms were too small and there were too many of them. Or they were too big and too few. In many buildings the architect seemed to specialize in combining a tiny kitchen with an only marginally larger living room. I suppose he thought he was being efficient. I saw it as trying to do too much with too little space to begin with, rendering both rooms cramped and useless.

Check Out: The Right Way To Invest For Retirement Income

I remember chiding my son during a tour of colleges for dismissing schools after being on campus only a few minutes. “Give the place a chance,” I pleaded. But I outdid him, rejecting many condos based on the building entry alone. I don’t think of myself as a particularly picky person. I’m sure my real estate agent finds that statement hilarious.

But whether it was due to me being too choosy or a dearth of decent options, the fact remains that it took us a good year of looking and another few months of haggling over price, doing inspections, etc. before closing and moving into our new place.

2. View the move as a chance to streamline your life. During this time, we also put our old house on the market. That meant getting rid of some of the “stuff” we’d acquired over more than 20 years.

I use the word “stuff” because it’s vague enough to encompass the broad range of things we had amassed. Old doors and chipped bathroom fixtures from past renovations filled the basement on the theory that “they might come in handy some day.” The attic had become a family museum of sorts—boxes filled with photos of relatives I didn’t recognize; old college term papers that my alma mater is no doubt dying for me to donate; a cache of cancelled checks from 1974. (Did I really make out checks to “Cash” for just $10?) We also had furniture, tons of it, not to mention books everywhere, on shelves, in third-floor closets, more than 1,500 of them.

Knowing that the heft of our possessions was beyond the capacity of almost any condo to absorb, I began selling items on craigslist: chairs, desks, old radiators, kayaks, a grow-light (orchids, not cannabis). And sell they did, usually for a reasonable price, to all sorts of buyers. (One chair ended up in an art exhibit; my picnic table became a prop in a play.)

As we got closer to selling our house, I hired a company to do a tag-sale. Over the course of two days, we sold: The Sopranos Season I on VHS; a scratched Pure Prairie League LP; two badly dented colanders; our Stickley dining table; a bag of old screws and nails. Two people scuffled over the comforter on my son’s bed, ignoring my wife when she tried to explain that it wasn’t for sale.

Eventually we sold almost everything, except for artwork, hand-made rugs and a few family heirlooms and antiques (in which category I include myself). What we didn’t sell, we donated to charity or threw out. (Those cancelled checks? Lost to history. I shredded them.) I loved the free, Zen-like feeling that came with unburdening myself of most of my worldly possessions—and the several thousand bucks we netted after the tag-sale company took its 30% felt pretty good too.

3. Don’t expect a huge home-equity windfall. At the start of this process I had visions of selling our house, paying cash for a condo with the proceeds and still coming away with a serious chunk of money we could eventually convert to retirement income. And that plan would have worked, had I been able to convince my wife to live in a 500-square-foot box with a close-up view of the traffic on I-95.

Check Out: Can I afford To Retire Early?

In the end, we bought a place that we had seen early on that I ruled out as too expensive. Apparently my wife has different standards. Financially, our “downsizing” was pretty much of a wash both in terms of relative sales prices and ongoing costs. My wife says we’ll come out ahead because we’ll spend less on the condo in  maintenance. I’m skeptical. I believe that many of the projects she called “maintenance” at our old house were actually optional improvements. I’ll be surprised if she doesn’t find the need for more “maintenance” in our new digs.

Perhaps you’ll do better. Maybe you live in an area where there’s a glut of cheap roomy condos or inexpensive townhouses with spectacular water views that will allow you sell your old place, pay cash and have enough dough left over to enhance your retirement security. Or perhaps you’ll do a better job convincing your spouse of the merits of living in a tiny apartment that resonates with highway noise. But unless you’re relocating to an area with lower living costs, I wouldn’t count on downsizing alone to free up a huge bundle of extra cash.

Check Out: 5 Questions To Ask Before Hiring An Adviser

Clearly, there are many more issues you’ll want to consider before downsizing, including whether you might just be better off tapping home equity in some other way, such as with a reverse mortgage. You’ll also want to think about how your living arrangements, whatever they may be, fit into your retirement lifestyle as well as your overall retirement income plan.

But if nothing else, I hope you’ll find my experience helpful if you embark on a downsizing adventure of your own.   (2/6/15)