Suze Orman Says You Shouldn’t Retire Even A Month Before 70. Here’s Why She’s Wrong 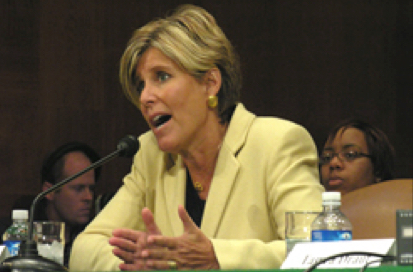 In a recent column, personal finance guru Suze Orman laid down the law about when we ought to retire: “Seventy is the new retirement age,” she let us know us in no uncertain terms. “Not a month or year before.” Apparently she realized that such a pronouncement might be hard for some people to swallow because immediately after making it she added, “Don’t ‘Oh, Suze’ me just yet. Please hear me out.”

Well, I did, but my reaction after doing so is: “Oh, Suze, telling people not to retire before 70 may make for a nice attention-getting headline. But it has serious shortcomings as practical advice for real people living in the real world.”

I’m totally on board when you alert people that their retirement stash may have to last into their 90s. And I agree 100% that by giving people more time to save—and more time for their savings to grow—that working longer can enhance their retirement security. I’ve not only made those points many times myself, I’ve also gone on to outline specific strategies to reduce the risk of outliving one’s savings and provide concrete examples of just how much a few extra years on the job can fatten one’s nest egg.

How Much Do I Really Need To Save For A Secure Retirement?

But it’s a huge leap from that sensible advice to claiming we all need to stay in harness until we hit 70. That sort of one-size-fits-all recommendation is too rigid; it simply doesn’t allow for the wide variety of circumstances different people may face as they approach the later stages of their career.

For example, it may be fine for someone who has a job he or she finds challenging, rewarding and not too physically exhausting (like, say, doling out financial advice) to continue working full- or part-time to 70 or beyond. But many people don’t have such a cushy gig. Even in today’s high-tech world not everyone makes their living in an office tapping away at a keyboard. Plenty of people still do physically demanding work that can take a toll on their health over the years, and they may not have the inclination to hang in until they’re a Septuagenarian.

Others have jobs they don’t find particularly interesting or satisfying. They see work mainly as a way to earn enough money to enjoy life in their free time. They’re looking forward to retirement. They don’t want to stay on the job any longer than absolutely necessary.

Have You Crash-Tested Your Retirement Plan Lately? If Not, Do It Now

Besides, even if someone wants to stay employed beyond their 60s, they may not have much of a choice. You acknowledge as much when you note that 30% of the people surveyed by the Transamerica Center for Retirement Studies reported they retired earlier than expected because of health issues. But in fact, the chances that someone may be forced to retire sooner than they wish are probably even higher than that stat suggests.

According to the Employee Benefit Research Institute’s 2017 Retirement Confidence Survey, nearly half (48%) of retirees leave the workforce earlier than planned, citing reasons ranging from health problems to downsizing at their company to having to care for a spouse or other family member. No doubt that’s at least partly why EBRI finds that, despite 38% of workers saying they intend to retire at 70 or older, only 4% of retirees have actually done so.

The bigger point, though, is that deciding when to retire isn’t just about age. It’s a decision that requires addressing a variety of questions: Do you have enough saved to fund an acceptable lifestyle the rest of your life? Are you emotionally ready to make the transition from career to retirement? Do you have any health issues that might affect your longevity? Have you given serious thought to what you’ll do after you retire so your post-career life will be fulfilling and meaningful and not just a period of marking time?

Some people, after weighing these issues, may decide it makes the most sense for them to exit the workforce before age 70—in some cases well before—and start enjoying retirement right away. Others may prefer to wait a few years to improve their shot at a secure retirement, even if that means sticking with a job they don’t really like.

How To Tell Whether You’re Financially Ready To Retire

Some people may realize they’re short on savings, but decide that rather than working longer, they’ll go ahead and retire but look for other ways to make ends meet, such as downsizing, taking out a reverse mortgage, working periodically or part-time or relocating to an area with lower living costs. Still others may opt not to continue working even though retiring will mean having to live on a more restrictive budget. And, of course, there will also be those who are eager to stay on the job as long as they possibly can and, unfortunately, others who have little hope of achieving a financially secure retirement no matter how long they work.

In short, just as there’s no single “correct” savings rate for building a nest egg or withdrawal rate for spending it down, there’s no age that’s right for everyone when it comes to retiring.

So, Suze, I applaud you for making people aware of just how long their nest egg may need to support them. And you deserve kudos as well for recommending that people claim Social Security later rather than sooner to receive a larger monthly payment (although I’d note that you can retire and still delay claiming to get a bigger future check—you don’t have to continue working to qualify for a higher benefit).

But deciding when to call it a career involves too many moving parts and trade-offs and is far too subjective and personal a call for anyone, no matter how well-intentioned, to claim that 70 or later—but not a month or year before—is the right time for everyone to retire. (11/1/17)