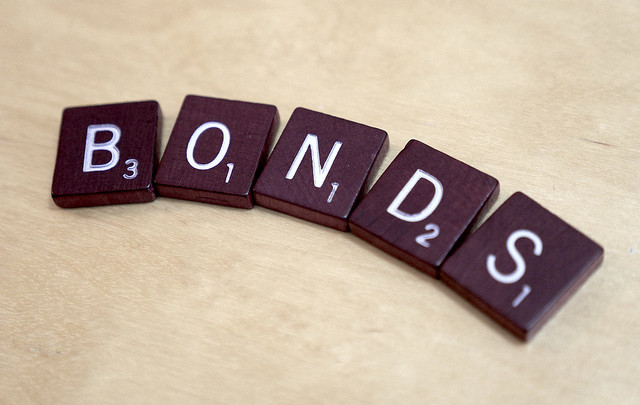 Bonds have been in the news a lot lately, as yields on 10-year Treasury bonds have been rising amid concerns that tax cuts and infrastructure spending in a Trump administration could spur inflation. At the same time, Federal Reserve chair Janet Yellen recently told Congress that the Fed could begin moving to boost interest rates “relatively soon.” All of which makes this a good time to see whether you really understand how bonds work and what role they might play in your investing strategy. Take this 10-question quiz to see where you stand.

1. The relationship between interest rates and bond prices is like…

a. a seesaw—rates and prices move in opposite directions
b. two best friends—where one goes, the other follows
c. a marriage—totally unpredictable; anything can happen

3. You can’t lose money if you limit your bond investments to Treasury bonds since they’re backed by the full faith and credit of the United States government.

4. The best gauge for estimating how much a bond or bond fund’s value will go up or down in response to changes in interest rates is its…

5. If you think that interest rates are about to rise, you should…

a. sell all the bonds you own
b. buy more bonds to take advantage of higher rates
c. maintain a reasonable bond stake in your portfolio as a hedge against stock-market volatility

6. All else equal, which type of bond will get hit hardest if interest rates rise?

7. The right percentage of bonds for your portfolio…

8. If yields in investment-grade bonds aren’t giving you as high a return as you would like, you should…

9. Rising interest rates hurt bond funds initially, but also have the potential to boost investors’ returns over the long run.

10. If you want to avoid stock market losses and ensure sure your savings will support you throughout a long retirement, it’s better to play it safe and invest all or nearly all of your nest egg in bonds.

1. a. A seesaw is a pretty good analogy, as interest rates and bond prices move in the opposite direction. When rates go up, prices go down, and vice versa. This makes perfect sense when you think about it. If you buy a 10-year bond that pays, say, 2.5% annual interest and interest rates rise soon afterwards so that new 10-year $1,000 bonds are paying 3%, do you think anyone would buy your 2.5% bond for $1,000 when they can get a new bond paying 3% for the same price? Of course not. The price of your bond would have to fall to compensate the buyer for receiving a smaller interest payments. But many people don’t understand the inverse relationship between bond yields and prices. When more than 26,000 adults were asked as part of a 2012 financial literacy survey by the FINRA Investor Education Foundation what will happen to bond prices if interest rates rise, only 28% answered correctly that prices would fall.

2. b. The yield curve is a line that traces the yields of Treasury securities from those with the shortest maturities to the longest. Typically it slopes upward to the right as yields usually rise as maturities increase. Recently, for example, the yield on 30-day Treasury bills was 0.34%,while yields on two-year Treasury notes and 10- and 30-year Treasury bonds were 1.13%, 2.39% and 3.05% respectively. Economists and investment strategists often look to the yield curve for hints of how the economy might perform. For example, a “normal” yield in which short-term rates are lower than long-term rates suggests that investors expect the economy to expand, while an “inverted” inverted curve where short-term rates are higher than long-term rates may indicate a recession. If you’d like to learn more about the mystery and majesty of the yield curve, you can check out this yield-curve primer.

3. b. The U.S. government’s “full faith and credit” guarantee on Treasury securities ensures that you’ll receive all scheduled interest payments and repayment of principal. But if the price of a Treasury bond you own drops because interest rates have increased and you sell while the bond’s price is below what you paid for it, you will realize a loss.

4. c. Duration, which measures how long it takes for a bond’s cash flows (interest payments and return of principal) to recover the price an investor paid for it, is a gauge of how sensitive a bond is to changes in interest rates. If a bond or bond fund has a duration of, say, seven years, its price will drop approximately 7% for each one-percentage-point increase in interest rates and rise by approximately 7% for each one-percentage point drop in rates. You can find the average duration of a bond fund by plugging the fund’s name or ticker symbol into the Quote box at the top of any Morningstar.com page. The figure will appear both on the Quote page and in the Portfolio tab.

5. c. Given the recent climb in bond rates and Fed chair Yellen’s seeming willingness to initiate rate hikes, selling bonds to avoid a loss and buying them back later may seem like a smart move. But while many experts expect rates to continue to rise, that doesn’t guarantee they will. For more than five years, analysts have wrongly been predicting that rates will soar and send bonds into a tailspin. And even if the Fed does take action to boost rates in mid-December, it doesn’t necessarily mean more rate hikes will immediately follow. After all, the Fed raised the fed funds rate last December, but, so far at least, has declined to boost them since. Fact is, even if interest rates do begin to rise as expected, no one really knows how long and how high they’ll climb. Rather than trying to time the bond market, you’re better off maintaining a stake in bonds as a way to provide protection against big stock-market setbacks. To mitigate the potential damage of rising rates, you should stick mostly to short- to intermediate-term bond funds, as they tend to have relatively low durations.

6. b. The extent to which a bond’s price falls when interest rates rise depends in part on the the bond’s coupon rate, which determines the size of the fixed payments the bond makes. A bond with a low coupon rate throws off smaller interest payments than one with a high coupon rate, which means a low-coupon bond generates less cash that can be re-invested to take advantage of higher rates when rates are rising. As a result, a low-coupon bond’s price must drop more than the price of high-coupon bond when interest rates rise. This is also why, all else equal, a low-coupon bond will have a higher duration than a high-coupon bond, reflecting the fact that its price will decline (or rise) more in response to rising (or falling) rates.

7. c. For years, a common rule of thumb was that the percentage of bonds in your portfolio should equal your age. During the 1990s stocks boom, that metric was considered by many to be too conservative, so age minus 10% or even age minus 20% became the new standard, which would give a 65-year-old a 55% or 45% bond stake instead of 65% under the old rule. But while it’s generally true that investors become more concerned about protecting their capital later in life—which suggests lightening up on stocks and investing more in bonds—not everyone of the same age has the same tolerance for risk. So while one of the age rules may work as a general guide for divvying up your assets, you’re much better off going to a risk-tolerance asset allocation tool like the free version Vanguard offers and coming up with a stocks-bonds mix that reflects both your tolerance for risk as well as how long you expect you’ll keep your money invested.

8. d. While high-yield bonds, emerging market bonds and even many dividend stocks can offer higher payouts than investment-grade bonds today, they also tend to be more volatile and subject to sharper setbacks. In 2008, for example, while the broad investment-grade bond market gained 5.2%, high-yield bonds and emerging market bonds lost 21.3% and 17.6% respectively. Many dividend stocks also got hit hard during the financial crisis. For example, the iShares Select Dividend ETF lost 33% in that financial-crisis year. If your goal is to provide stability for your portfolio during periods of stock-market turbulence, you’ll want to think twice about moving your bond stake into these types of investments.

9. a. Although rising rates hurt bond funds in the short-term, over time they can actually work to your advantage and generate a higher return than you would have earned had rates stayed the same. The reason for this is that a good part of a bond fund’s return comes in the form of reinvesting interest payments from the bonds the fund holds and the proceeds of maturing bonds. When rates are rising, this money is reinvested at higher rates, eventually boosting the fund’s return, as shown in this example from Vanguard. This process can take a while. Generally, you have to be willing to hold onto the bond fund longer than the duration of your fund—about six years in the case of a total bond market index fund. But that shouldn’t be a problem if you’re investing for a long-term goal like retirement.

10. b. Bonds do generally provide good protection against stock-market setbacks. But if you keep all or nearly all of your retirement savings in bonds, you may not earn the returns you need to provide an adequate income that will keep pace with rising prices during a long retirement. That said, you don’t have to load up heavily on stocks. As long as you don’t overdo it with withdrawals—starting, say, between 3% and 4% of your nest egg’s value and then adjusting your initial withdrawal for inflation—investing as little as 30% to 40% in stocks and the rest in bonds should provide you with a reasonable probability that your savings will last 30 or more years. To get a sense of how different mixes of stocks and bonds might hold up given different withdrawal rates and lengths of time in retirement, you can check out T. Rowe Price’s retirement income calculator, which you’ll find in the Retirement Income section of my Retirement Toolbox.

Are You Missing Out On Guaranteed Retirement Income Because Of These 5 Misconceptions About Annuities?

Scoring: Give yourself 10 points for each correct answer.

100: You’re a bona fide bond wizard. You should be well-equipped to manage your bond stake in the months and years ahead.

70-90: You’re no Bill Gross, but you still have a solid understanding of how bonds work and why they belong in a diversified portfolio.

50-60: You can use some remedial work. I recommend you check out this Morningstar course on bonds.

less than 50: I’d be wary of making any moves in bonds before reading the Morningstar course mentioned above.  (12/7/16)