5 Tips For Choosing The Best Annuity For Lifetime Income 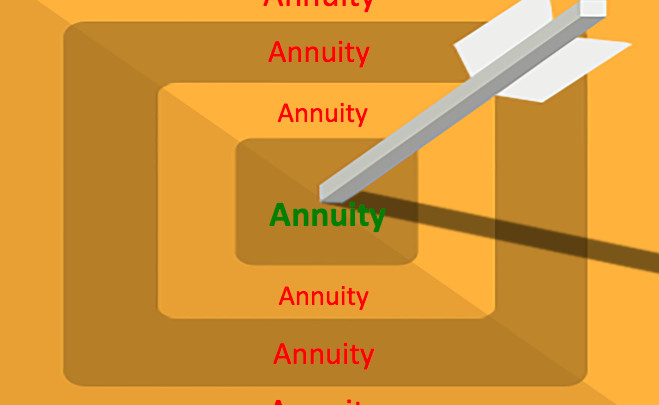 I’m thinking of putting some of my savings into an annuity that can provide me guaranteed retirement income for life. Do you have any suggestions for how to choose the right one?

Annuities come in many varieties, each with its pros and cons. But if you want to convert a portion of your savings into reliable lifetime retirement income you can start spending now or in the very near future, your best option is an immediate annuity.

The way this type of annuity works is pretty straightforward. You hand over a lump sum to an insurer who in turn guarantees you monthly income for as long as you live. If you want to assure that the checks will keep coming as long as either you or your spouse is alive, you can do so by choosing a “joint-and-survivor” option. So, for example, if you go to this annuity calculator, you’ll see that a 65-year-old man who invests $100,000 in an immediate annuity would receive roughly $560 a month for life, a 65-year-old woman would get about $530 and a 65-year-old man-and-woman couple would receive $470 or so a month.

The catch—if you want to call it that—is that to get the highest lifetime payment from an immediate annuity you give up access to the amount you invest. So the 65-year-olds in the example above would no longer have access to their $100,000. As a practical matter, this means you likely won’t want to invest all, or probably even most, of your savings in an immediate annuity. You’ll want to have plenty of other savings invested in a diversified portfolio of mutual funds, ETFs, cash or other securities that can generate long-term growth so you can maintain your retirement lifestyle in the face of inflation and that can provide liquidity should you need cash to meet an emergency or pay unexpected expenses.

If you decide that putting a portion of your savings into immediate annuity in return for lifetime income is the right choice for you, then the next step is identifying an annuity (or annuities, as the case may be) that can provide the right combination of income and security. Here are 5 tips for doing that.

1. Gather a bunch of quotes. Just as some banks pay higher rates of interest on savings accounts and CDs, so do some insurers make higher payments on their annuities. In my experience, payouts can vary by 6% to 10%, or enough to make a noticeable difference in your retirement standard of living. So before you invest in an annuity, you want to get a good sense of the range of payouts that different insurers are offering. Fortunately, you can do that relatively easily. For example, ImmediateAnnuities.com, an online site that sells annuities, will email you quotes from 10 or so insurers, and you can also get information and quotes through firms such as Fidelity, Schwab and Vanguard.

2. Stick to highly-rated insurers.  When you buy an annuity, you’re depending on the issuing insurer’s ability to make those promised payments to you well into the future. So you want to stick to insurance companies that are sturdy enough to make good on their commitments. But since most individuals aren’t up to the task of analyzing the finances and claims-paying ability of insurance companies, a more practical way to home in on strong insurers is to look for those that get high financial strength ratings—say, A+ or better—from firms like A.M. Best and Standard & Poor’s. A lofty rating doesn’t guarantee that a company won’t later run into trouble. But it certainly makes more sense to go with a highly rated insurer than one with a low rating that’s already showing signs of weakness.

Check Out: 2 Ways To Guarantee Retirement Income For Life

3. Diversify. The principle here is the same as diversifying among many stocks and bonds rather than investing in the shares of a single company or bond issue. By spreading the money you plan to invest in an annuity among two or more highly rated insurance companies, you assure that your entire annuity stake (and your retirement income) isn’t dependent on the fortunes of a single insurer.

5. Buy in stages. Whatever amount you decide to devote to an annuity, consider investing it over time. So, for example, rather than investing $150,000 all at once, you might invest $50,000 now, another $50,000 next year and the final $50,000 the year after that. Why? Two reasons. First, all else equal, the level of interest rates largely determines annuity payments. So investing over a few years reduces the chance that you’ll put all your money in when interest rates, and payouts, are at a low. Second, it can be hard to judge early in retirement just how much guaranteed income you’ll require. Investing smaller amounts over time can give you a better chance to gauge your actual income needs—and possibly prevent you from “annuitizing” more of your savings than necessary.  (7/13/15)