4 Lies We Tell Ourselves That Can Sabotage Our Retirement 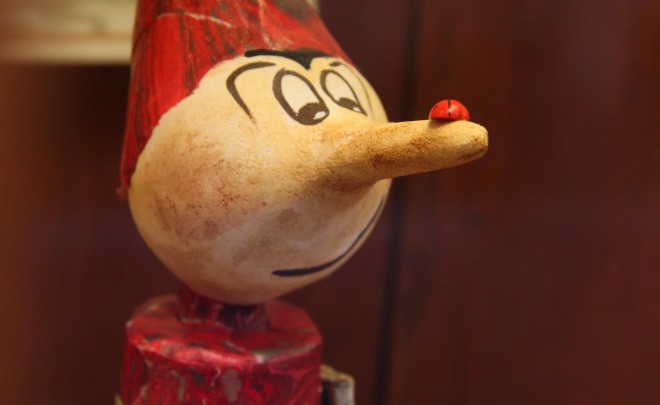 We like to think it’s things beyond our control—job layoffs, market downturns, big unanticipated expenses—that undermine our planning efforts and make achieving a secure retirement such a challenge. But the truth is we often inflict the most serious damage on our own by deluding ourselves into believing we’re making reasonable decisions when we’re not. Here are four examples of the kind of lies we tell ourselves (or, for a more charitable spin, the excuses we make) that can can dramatically sabotage our chances of retirement success.

Lie #1: I can’t afford to save now, but I’ll definitely get serious in the future. The problem with this justification is that it may take longer to get started than you think, as demonstrated in a recent Prudential TV commercial featuring Harvard psychologist Daniel Gilbert. The spot opens with a shot of a big blue wall that shows the ages 20 to 45 depicted on a vertical scale in five-year increments. Gilbert asks a group of young people put a paint mark on the wall at the age they think they should start saving for retirement. He then asks an older group to mark the age at which they actually started to save. The idea is to visually portray the retirement savings “action gap”—the difference between when we know we ought to start saving and when we eventually get around to it. In this case, based on a survey of ore than 2,500 people done before the shoot, that gap was six years, with the youngsters saying they should start at age 26 on average and the oldsters having launched their savings effort at 32.

If you think getting a late start saving for retirement of just six years is no biggie, think again. A 26-year-old who makes $40,000 a year, gets 2% annual raises, saves 15% of yearly pay and earns 6% annually on his savings would accumulate a nest egg of just under $1.2 million by age 65. If that person waits six years until age 32 to get started, his nest egg would total roughly $855,000. That’s $345,000, or almost 30%, less for missing just those initial six years. If our fictional 26-year-old holds off 10 years until age 36, the nest egg shrinks to $685,000, some $515,000, or nearly 45%, less than with the early start. As Gilbert says in the commercial, “This gap between when we should start saving and when we do is one of the reasons why too many of us aren’t prepared for retirement.”

Lie #2: If I fall behind, I’ll make up for it with higher investment returns. This rationale sounds convincing enough, but it implies you have control over how much your investments earn. News flash: You don’t. While you likely can improve investing results by sticking to low-cost index funds, you’re still pretty much at the mercy of whatever raw returns the financial markets deliver, which many pros expect to be considerably lower than there were in the past.

Of course, you can try shooting for higher gains by, say, increasing the percentage of your portfolio you invest in stocks or by channeling more of your money into high-octane investments like technology and emerging market shares, bu doing so necessarily means taking on more risk and dramatically increasing the chance of your investing strategy going badly awry. In short, anyone who thinks he can count on his investing prowess to make up for poor retirement planning is deceiving himself or simply doesn’t understand how the financial markets work. Either way, he’s playing a dangerous game.

10 Tips To Supercharge Your Savings

Lie #3: I don’t need to do a full-fledged retirement check-up. I have a pretty good feel for where I stand without crunching the numbers. Really? So you can assess in your head how much the savings you’ve already accumulated will grow between now and the time you retire plus how much you’ll save over the rest of your career will add to that amount, and then gauge the probability that that the sum of those figures will be able to support you over a retirement that could last upward of 30 years. Just when did you receive your Nobel Prize in economics?

Fact is, the only way you can realistically gauge whether you’re on track toward a secure retirement—or, if you’re already retired, see whether you’re spending down your nest egg at a sustainable rate—is to plug information about your savings and investments into a retirement income calculator that can estimate your odds of retirement success (or hire an adviser who can do the analysis for you).

Even that won’t guarantee 100% accuracy. After all, we’re talking about projections, which are inherently squishy, especially when so many variables (how the markets will perform, whether you’ll meet your saving and spending targets, how long you’ll live) are involved. But by doing this sort of analysis and then repeating it periodically—say, every year or so—you’ll be able to get a sense of whether you’re moving closer or farther away from your goal and then make gradual adjustments, if necessary, to get back on course.

Have You Crash-Tested Your Retirement Plan? Do It Now

Lie #4: If all else fails, I’ll just work in retirement. Again, this assertion seems plausible at first glance. Indeed, the Employee Benefit Research Institute’s 2016 Retirement Confidence Survey reports that 67% of workers are planning to work for pay in retirement.

But just as there’s a disconnect between when people say they’ll start saving for retirement and when they actually do, so too is there a gap between the number of people who claim they’ll work in retirement and how many actually do. And in fact, the EBRI survey finds that only 27% of retirees have actually worked for pay in retirement.

That’s not to say that future retirees might not act differently, if for no other reason that these days retirees can easily shop for jobs by going to sites such as RetiredBrains.com and Retirementjobs.com. But that doesn’t necessarily mean you’ll find a job that you enjoy or that pays as much as you’d like, or that you’ll be as eager to hold down a retirement job as you thought you would be before you retired.

Bottom line: Working periodically or part-time can be an excellent way to raise some extra spending cash and stay more socially engaged. But working is a better solution if you’re doing it because you really want to, not because you no other choice.   (4/27/16)