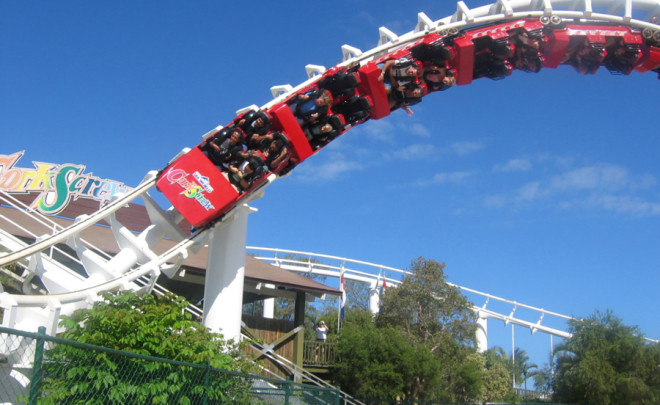 Stock market gyrations can be upsetting, especially when they send the value of your 401(k) and other accounts south in a hurry. But periods of turmoil can also be helpful if we use them to re-evaluate our investing and planning strategies. Here are three key lessons investors can draw from this current bout of market madness, along with advice on how to use those lessons to improve our investing results and retirement prospects.

1. Don’t expect the market to always make sense. The stock market is usually rational. Although prices change moment to moment on all sorts of news and changes in expectations, over the long run it’s driven by fundamentals. Prices typically rise when the prospects for the economy and corporate earnings are upbeat, and prices stagnate or fall when the future outlook appears dim. Over the long run, however, the trend has definitely been up, with stocks generating double-digit annualized gains since the mid-1920s.

But in the short-term things can go kerflooey. Stock prices have slumped since the beginning of this year, apparently on fears of slower growth in China and falling oil prices, which have dropped roughly 70% from mid-2014. But as Princeton economist Alan Blinder pointed out in a well-reasoned column last week, even though the Chinese economy is huge, the economic ties between the U.S. and China aren’t sizable enough to have a major effect on U.S. growth. And although oil prices may hurt energy companies and some oil-dependent regions, on balance lower energy prices are a boon to consumers and should be an overall plus for the economy. So it would seem fears of a major market meltdown are unfounded.

Check Out: Can Your Retirement Strategy Survive A Market Crash?

2. Investing pundits often make even less sense than the market. To be fair, there are plenty of market observers who make sane, measured analyses of the economy and the markets. Unfortunately, in times of turmoil they’re often drowned out by shriller voices that seem intent on scaring the bejeezus out of investors with dire pronouncements or titillating predictions of Armageddon. One dubious assertion that particularly caught my eye last week was that we may already be in a bear market. The evidence for this alert of underwhelming importance was that even though broad market indices like the Standard & Poor’s 500 hadn’t dropped 20% from their previous peak, many small stocks as well as the small-cap Russell 2000 index were off more than 20% from their peaks.

Check Out: Do You Have Financial “Street Smarts”? Try This Quiz

I don’t want to suggest that small company stocks don’t count. They do, especially if you own them. But if you have a broadly diversified portfolio of stocks, mutual funds or ETFs that mostly reflects the value of the stock market overall (as you should), then the portion of your money invested in small shares is likely very small, perhaps 10% or so. Thus, broad market indices like the Standard & Poor’s 500 or the even broader Russell 3000 or Wilshire 5000 provide a much better indication of how the stock portion of your wealth and retirement savings is doing rather than a narrower benchmark that reflects only a small portion of market value.

3. A decline in prices—even a 10% or better correction—doesn’t necessarily mean a bear lurks ahead. To become a full-fledged bear market, every one of the 20 bears since 1929 had to first go through “correction” territory—that is, a decline of at least 10% but less than 20%. But that doesn’t mean that every correction becomes a bear. Indeed, if you check out this compilation of bear markets from Yardeni Research, you’ll see that since 1929 there are have been 46 times stock prices fell by 10% or more (and a few more times that just missed the 10% threshold), but fewer than half (20) of those declines went on to become bear markets.

Check Out: Should You Invest Your Nest Egg Like Warren Buffett Recommends?

So while bear-market talk will inevitably escalate during stock sell-offs like we’ve seen so far this year, that doesn’t mean the current bull market is necessarily ready to give way to a bear. In fact, since this bull began in March 2009, we’ve had four corrections from which the market has recovered.

How can you use the three lessons above to improve your investing and retirement planning? I’d say the single biggest takeaway is recognizing (and accepting) that uncertainty is not only inherent in markets and investing, but difficult, if not impossible, to interpret. Sometimes falling stock prices are the market’s way of telling investors that trouble, say, a recession, lies ahead. Sometimes they’re not. As the late Nobel Prize-winning economist Paul Samuelson famously said, “Wall Street indexes predicted nine out of the last five recessions.”

Check Out: A Simple-But-Smart Investing Strategy That Actually Works

So the volatility of recent weeks might be presaging a major slump in the market and/or the economy in the near future. Or it might be just a temporary spasm reflecting investor anxiety and fear. We don’t know. And since we don’t, it makes no sense to get swept up in the hype, the hysteria the whole hurly-burly of market prognostication or, worse yet, make investing moves based on what this volatility may or may not mean. The smarter response is to set an investing strategy that jibes with your risk tolerance and investing goals (which you can do with this risk tolerance-asset allocation questionnaire), and then do a periodic portfolio check-up to make sure you and your portfolio are still in synch.

And while you’re at it, take advantage of these uncertain times to review your overall retirement planning strategy to ensure you’re still on track to a secure post-career life. As part of that review, you might also “crash test” your retirement plan to see how it would fare if the market does go into a steep dive. But don’t assume that you—or anyone else, for that matter—really knows where the market is headed or how to capitalize on what it will supposedly do.  (1/24/16)